The Grade II registered garden at Barrow Court just 6 miles south of Bristol is one of the finest examples of the revival of a formal style of gardening that marked the progress of garden design in the 19th century. The Victorian search for a historical legitimacy, a true Englishness, was realised at Barrow Court though the work of the garden architect Francis Inigo Thomas (1866-1950). The Elizabethan garden was Thomas’s inspiration, a formal renaissance garden that was part of the overall architectural concept of the house, placed sympathetically within the wider landscape.

The use of enclosure within the garden, it can be argued, distinguishes Thomas’s work from ealier revivalist phases throughout the 19th century. Here a Grove is defined by a border of standard Lime trees, featuring a central avenue, aligned to one of the gardens main axis, terminating in an exedra featuring monumental pillars and urns.

More than a hundred years after its creation the Grove still exists, here pictured in late summer 2011. The Lime avenue, originally intended as a pleached row, underplanted with holly, now exists as a line of pollards. Certainly a more cost-effective way of maintaining the trees, but losing some of the original formality. Maximun formality of design, with maximum informality of planting is often quoted as the distinguishing feature of these late Victorian gardens – a forerunner of the Edwardian style famously developed by the collaboration of Edwin Lutyens and Gertrude Jekyll – a union of architecture and horticulture that still inspires today.

Thomas’s own instructions for the maintainence of these groves was somewhat romantic and, perhaps surprisingly, more in keeping with the wild naturalism of his sometime adversary, William Robinson. Thomas was an artist, with all aesthetic considerations being put to the simple test of picture compostion. Known locally as the arboretum, Thomas, I’m sure would not have approved, as a scientific collection rather than an artistic design was one of Thomas’s more dissaproved of features.

Maintaining that balance between an intimate flowering shrubbery (Thomas’s concept for the Grove) and an overgrown, impenetrable thicket is what Gareth has been working on over the past few years. Renovating neglected old shrubs, keeping that irreplaceable feature of age but encouraging flower and fragrance, with just enough openess to allow some quiet exploration. Stumbling across an Oemleria cerasifera or a Styrax japonicus in full flower is still one of the delights as restoration continues at a sensitve pace, the two mature Katsura trees (Cercidiphyllum japonicum) always featuring impressively. 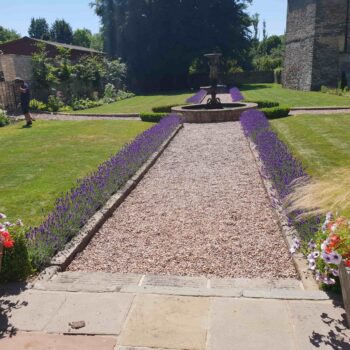 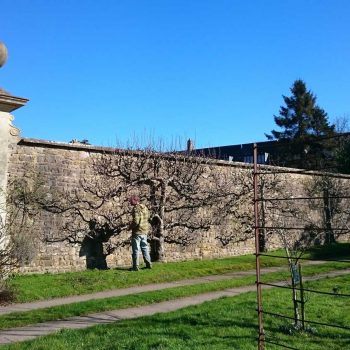